As storms hit New York, the US Open 2021 is halted due to rain on a covered court 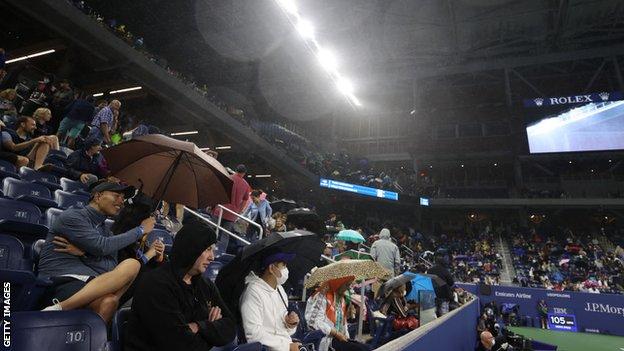 Because of the rain, the game has been postponed. These aren’t the kinds of words you’d expect to hear on a roof court. However, the rain that hit the northeastern United States on Wednesday was so fierce that water found its way inside and rushed into Louis Armstrong Stadium, where US Open supporters had set up umbrellas.

The second-round match between Argentine 11th seed Diego Schwartzman and South African Kevin Anderson was suspended in the opening game of the second set after being interrupted twice. Before exiting the court, Anderson stated, “You guys call me when you’re ready to play tennis.”

Huge gusts of wind continued to blast the rain through the sides of the roof and onto the court, despite the efforts of umpires and ball kids to dry the surface with towels. At Arthur Ashe Stadium, there were opposing scenarios at the same moment, with Stefanos Tsitsipas and Adrian Mannarino remaining dry and playing their match under the roof.

After the match, Schwartzman and Anderson resumed their battle on Ashe, with Schwartzman claiming a commanding 7-6 6-3 6-4 victory.

The New York area is under a tornado and flooding warning, and play at Flushing Meadows was halted on the outdoor courts on Wednesday, but few expected an indoor match to be disrupted in the same way.

The first set was paused for a half-hour when it was tied at 5-5, and the tie-break was stopped at 4-4 when both players protested about the slippery surface. They rallied, and Schwartzman won the set, but Anderson’s serve was broken in the first game of the second set, and play was suspended.

At least nine people have died as a result of the terrible weather brought on by the leftovers of Tropical Storm Ida, according to local media. New York and New Jersey governors issued states of emergency, while New York City Mayor Bill de Blasio described the storm as a “historic weather event.”

Almost all subway lines in New York City have been shut down, and non-emergency cars have been banned from the roads. Several planes and trains from New York and New Jersey have been cancelled.