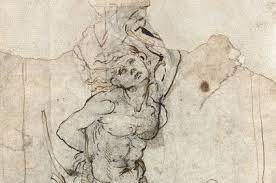 The drawing, entitled Head of a Bear, was sold to a private collector.

The drawing is 2 3/4 inches by 2 3/4 inches and drawn using a technique called silverpoint. This process involves using a silver stylus to draw on specially prepared paper.

“In these early and innovative drawings, Leonardo infused a new level of realism into a longstanding tradition of animal imagery, illustrating bestiaries and model books produced in Europe from the Middle Ages through the Early Renaissance,” Christie’s said.

Christie’s noted that “Head of a Bear is one of a “very small” number of Leonardo artworks still held in private hands.

The drawing was completed sometime in the late 15th century and its ownership can be traced to British artist Sir Thomas Lawrence, who passed it on to his art dealer upon his death in 1830. The dealer, Samuel Woodburn, sold it through Christie’s in 1860, and it was later acquired by Capt. Norman Robert Colville, who died in 1974.

Christie’s declined to identify the most recent owner of the drawing or Thursday’s buyer.