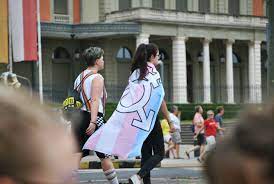 The Florida House and Senate on Wednesday  passed a controversial plan that would ban transgender female athletes from competing on high-school girls’ and college women’s sports teams.

A controversial bill banning transgender athletes from women’s and girls’ sport in Florida has been sent to Governor Ron DeSantis for his signature. Under the measure on its way to Gov. Ron DeSantis, female students’ eligibility for sports teams would be based on their “biological sex” on birth certificates issued “at or near the time of the student’s birth.”

A stand-alone Senate bill aimed at preventing transgender athetes from competing on girls’ and women’s teams stalled last week. But the issue re-emerged Wednesday as an amendment to the education bill (SB 1028) and quickly passed.

Transgender female athletes would be limited to playing coed sports or on teams with male athletes under the legislation, which restricts female teams to individuals identified as female on their birth certificate.

The bill applies to high school and college sports sponsored by public schools, including intramural and club teams.

Opponents Wednesday said the ban targets a fragile community of young Floridians struggling to come to grips with their gender. It also involves only a small group of transgender women and girls who may want to play sports.

The measure now goes to Gov. Ron DeSantis, who is likely to sign it into law. Florida is among some 30 states where Republican lawmakers have seized on the transgender athlete issue after it was highlighted at February’s Conservative Political Action Conference in Orlando.

Sen. Janet Cruz, D-Tampa, Wednesday night asked fellow lawmakers, “Why do we inflict ourselves on people who are suffering?”

She noted that many families have members facing such gender issues and the physical and psychological demands are challenging.

The measure was approved by the House 79-37, in a mostly party-line vote. A little more than two hours later, the Senate OK’d the bill 23-16 along party lines.

Sen. Kelli Stargel, R-Lakeland, also defended her support for the ban. “You can sit here and say there’s no difference between men and women. If that’s not the case, then why do we have the bills we have to protect women when it comes to assaults and rape … we know that men are stronger than women,” she said.

Under the bill, an athlete’s gender would be defined based on the sex assigned to him or her on their birth certificate. But Republican lawmakers backed away from earlier provisions that would have allowed schools to verify a student’s birth gender by a medical inspection of an athlete’s genitals.

Elementary school students also were dropped from the ban. Still, Democrats were unmoved. “This is unnecessary. This is stupid,” said Sen. Jason Pizzo, D-North Miami Beach.