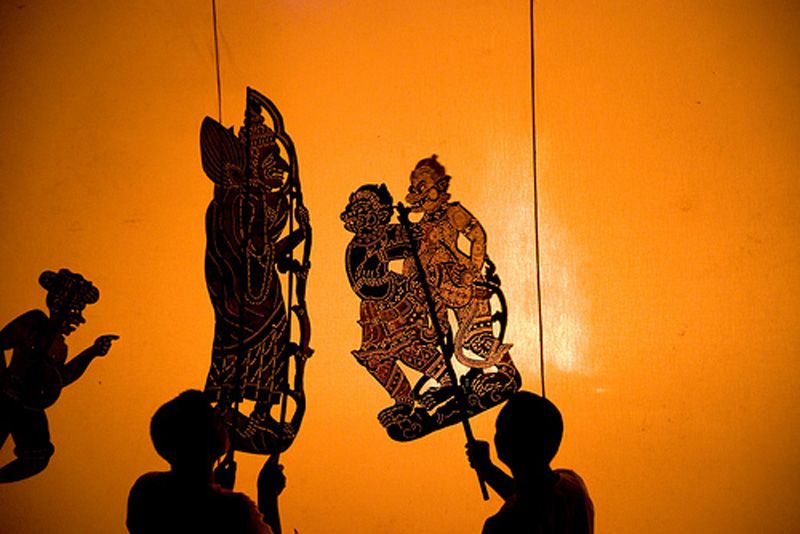 Tholpavakoothu (thol meaning leather, pava meaning puppet and koothu meaning play) is a form of shadow puppetry performed during events and festivals held in the temples dedicated to the goddesses Durga or Kaali. The artform is found only in Palakkad, Thrissur and neighbouring villages in Kerala.

Performed three to four times a month between January and May, a 42-foot-long special stage called koothumadam is set up in the temple premises. It displays mythological figures backlit by fire or lights behind a screen.

The festive air is palpable as a rhythmic drum beat begins and the performers emerge carrying a lighted lamp. Fireworks go off to announce the start of the performance and then, in total darkness except for the light of the lamp, a sense of calmness prevails.

A row of 21 wicks placed in coconut shells are lit behind the screen, made up of a white cloth stretched across the koothumadam, bordered by a black cloth.

Tholpavakoothu is based on Kamba Ramayana (the Tamil version of the epic Ramayana), which tells the story of the Hindu God Sri Rama from his birth to his coronation as the king of Ayodhya.

It is said that tholpavakoothu is performed to please the Goddess Bhadrakali, as she could not witness the slaying of the demon king Ravana by Rama, which is why an idol of the goddess is placed on a pedestal in front of the stage.