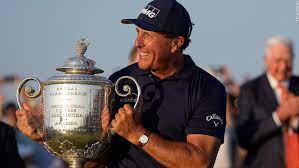 The pandemonium closed in around Phil Mickelson as he walked toward the 18th green at Kiawah Island, where thousands upon thousands of euphoric fans wanted a piece of the history he delivered Sunday in the PGA Championship.

Phil Mickelson becomes the oldest major winner in history with a two-shot win. The long and punishing Ocean Course at Kiawah Island was tamed by a man just over three weeks shy of his 51st birthday. Mickelson made par at only one of the first seven holes, but three bogeys and three birdies.

Mickelson never thought he was too old to win again, much less a major. He just didn’t have much evidence on his side until a remarkable four days at Kiawah Island where he kept his nerve and delivered all the right shots for his sixth major, and by far the most surprising.

He made two early birdies with that magical wedge game that never left him and then let a cast of challengers fall too far behind to catch him in the shifting wind off the Atlantic.

Mickelson closed with a 1-over 73 to win by two over Brooks Koepka and Louis Oosthuizen.