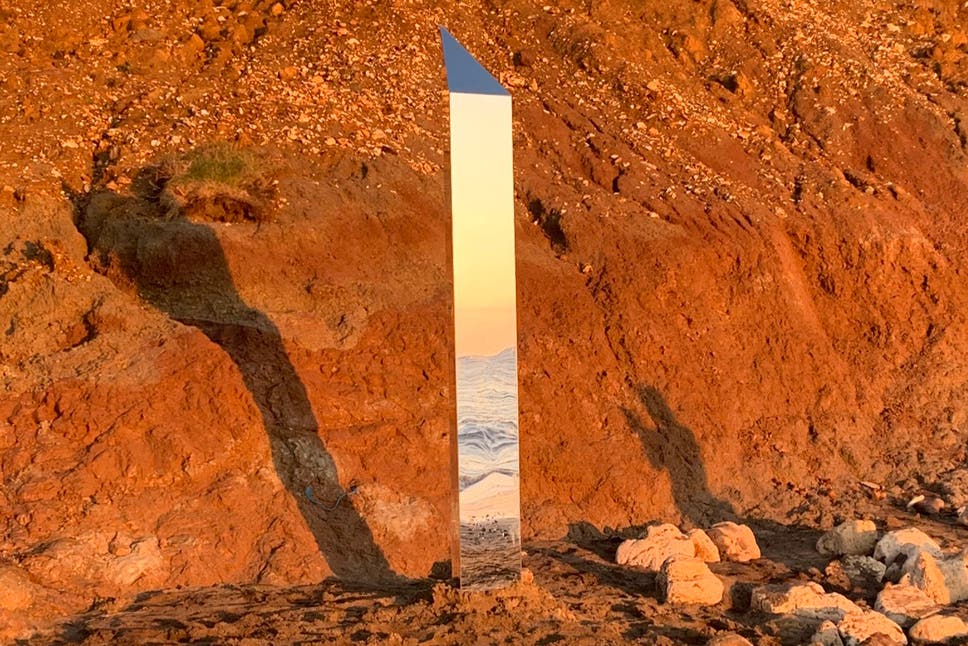 A monolith is a large single standing block of stone.

Monolith mystery is fascinating the netizens across the world. This sudden chain of appearance and disappearance of the monolith has led to many presumptions. Different peoples are looking at it from different angles.

In this series of appearances and disappearances, a new block is added. New Monolith appears on the English Island and Netherland.

Netizens are trying to find out a relation between them but apart from conspiracy theories, no proof is available. This series of popping and vanishing seems much more like sci-fi but the real existence of these metal monolith people shocked and surprised.

The first Monolith appeared in Utah’s rock country. The 12 feet shining metal monolith was standing firm in a remote desert canyon of Utah. It was discovered on 18th Nov 2020. The shiny metal monolith caught the attention of a helicopter crew that was busy counting bighorn sheep. The crew noticed something shiny in the remote areas of the desert and went to investigate it and there they found a 12-foot tall monolith.

As per the sources, initially, the location of the monolith was not revealed by the Utah Department of Public Safety as it was found in a very remote area and it could attract the attention of everyone and the route to the monolith was tough to reach by foot or even by a vehicle. The officials had no idea who installed the monolith.

On 27th Nov the monolith disappeared and the officials say that it was removed by an unknown party and officials are not involved in it.

After four days of its appearance, it vanished. The authorities do not know from where it came or who installed it or how it vanished.

The saga of monoliths continues after the appearance of the third monolith on Atascadero’s Pine Mountain. This one was also similar to the previous two, 10 feet tall and 18 inches wide on the 1,300-foothill. Unlike the other metal monoliths, it was not firmly placed in the ground.

The third one also vanished but this time the reason was known. A group of youngsters who called themselves Christians vandalized the monolith and replaced it with a hand made cross in a live stream Video and also posted it online. They vandalized the structure while chanting, ‘christ is king’. This action offended the local authorities.

The series of monolith popping and disappearing didn’t end here, another similar monolith was discovered in Isle of Wight, Britain. The Isle of Wight is an island present on the south coast of England.

The National Trust, which owns the site said that the monolith was installed without permission but it has no plans to remove it now. As per sources, this monolith got stolen due to the attention it got.

Another monolith appeared in the Netherlands. This was found in private land on Sunday near the Kiekenberg nature reserve in northern Friesland province, a spokesman for the Dutch Forestry Commission said. Some hikers found it.

“We know that it was probably placed this weekend because some hikers who were walking there found it, but we don’t know it got there,” said forestry commission spokesman Imke Boerma

Monoliths have become an internet sensation. Some sci-fi fans connect it to the Stanley Kubrick directed 2001: A Space Odyssey. But these all are assumptions no one really knows from where they are coming and how they get vanished.