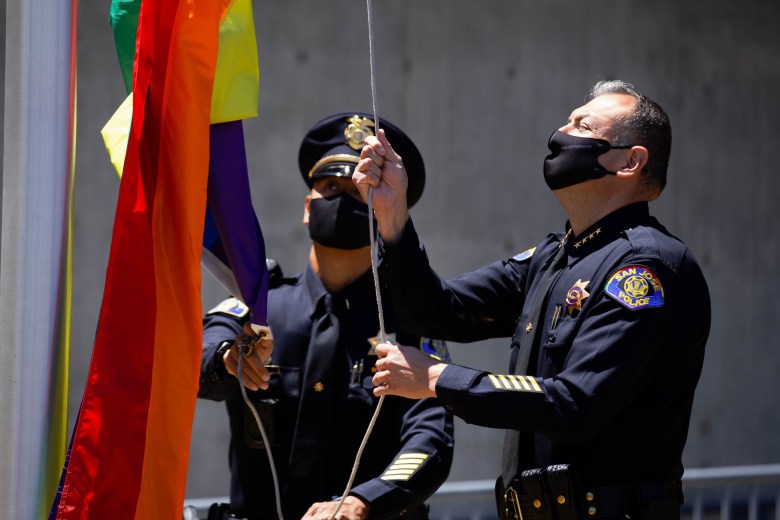 In many parts of the world, June is the ‘Pride Month’, dedicated to celebrating the LGBTQ community and their struggle against discrimination and social ostracisation. Many countries organise month-long activities and initiatives that culminate into a loud crescendo of the ‘Pride Parade’, usually held at the end of June.

In support of LGBTQ community, San Jose Police Chief Anthony Mata, a 25-year veteran of the force who rose to the top spot in March, continued one tradition Wednesday instituted by his predecessor: The raising of the LGBTQ Pride flag in front of police headquarters on Mission Street.

“This flag shows the world our pride in our LGBTQ officers, dispatchers, professional staff and members of our community we serve,” he said. “This flag also celebrates our diverse backgrounds and allows us to acknowledge the struggles and challenges the LGBTQ community has endured.”

Flanked by Mayor Sam Liccardo, Billy de Frank Director Gabrielle Antolovich, City Council members David Cohen and Matt Mahan, and members of the police department’s LGBTQ advisory board, Mata helped hoist the rainbow banner to celebrate Pride Month. San Jose was a pioneer when it became the first police department of a major U.S. city to raise the flag in 2019, creating a tradition of diversity and inclusion that Mata says he’s proud to be part of.