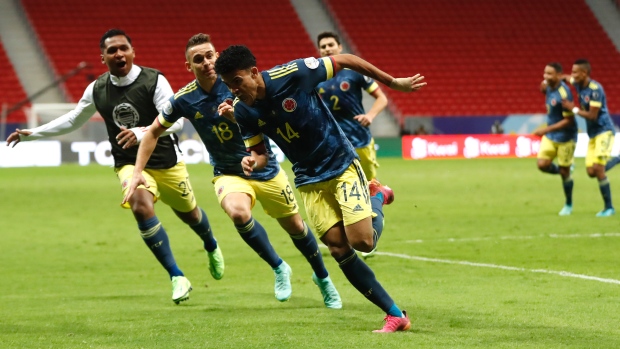 Luis Diaz scored a second-half double, the second an unstoppable 25-metre strike in injury time, to give Colombia a 3-2 win over Peru on Friday and secure them third place in the Copa America.

Yoshimar Yotun put Peru ahead on the stroke of half time when he took Christian Cueva’s pass and lifted it over the advancing goalkeeper Camilo Vargas.

In the first half, both sides struggled to create key openings. Colombia looked to assert themselves but Peru was able to find space on the counter. It took almost 30 minutes for the first big chance of the game. Christian Cueva set up dynamic striker Gianluca Lapadula who sent his effort wide of the far post as he ran through on goal.

A few minutes later winger Luis Diaz, one of the stars of the 2021 Copa America, forced a smart save from Pedro Gallese. In the 39th minute, Sergio Pena broke into the area at pace and tried to round Camilo Vargas but the Colombian stopper was able to just about deny him.

The final of the tournament between defending champion Brazil and Argentina will be played Saturday night at the Maracana Stadium in Rio de Janeiro.

Peru opened the scoring at the Mané Garrincha Stadium in Brasilia with Yoshimar Yotún in the 28th minute, with an assist from Christian Cueva that allowed him to beat Colombia’s Vargas with a soft lob.

Colombia equalized in the 49th minute after a free kick taken by Juan Guillermo Cuadrado went through the middle of the Peruvian wall and past goalkeeper Pedro Gallese.